Which of these are in the wrong place? 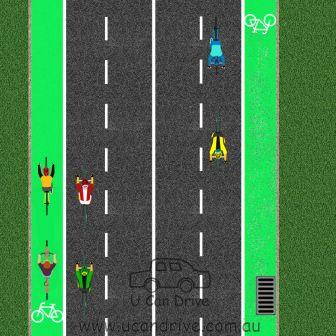 The fact is bicycles are allowed to ride along side each other, so long as they are within 1.5m of each other and there are only 2 side by side (unless another is overtaking them).

Looking at the bicycles on the right side of the image, they are NOT required to ride in a bicycle lane! In this case there is loose gravel in the bicycle lane and a drain, both of which are a hazard to cyclists.

They MUST however remain on the left hand side of the road. Bicycles are not allowed to travel in the bicycle lane on the wrong side of the road and must always ride to the LEFT of oncoming traffic.

What benefits are there to riding side by side?

For the cyclist it does make them more noticeable, easier to see, than riding single file. This does however mean that another vehicle wanting to overtake them will have to go further out into the next lane. The other side of that though... It does half the number of bicycle you have to overtake. In the image here you'd only have to overtake 2 bicycles really, instead of 4.

In the image to the right these bicycles are legally riding side by side, the vehicle behind them will naturally want to pass. But can he?

One of the changes regarding bicycles is that vehicles MUST stay at least 1m away from a bicycle if the speed limit is 60km/h or below. Once the speed is over 60km/h then it is 1.5m away.

A change that accompanied this is that you are allowed to cross over solid white lines, even double ones, to pass them, if it is clear and safe to do so.

That said, my personal opinion is that double white lines suggest it's not safe to do so in most cases, so do take extra care.